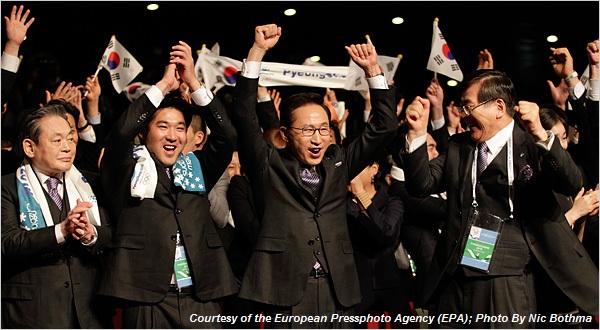 On July 6, 2011, the International Olympic Committee (IOC) elected PyeongChang, Republic of Korea  as the host city for the 2018 Winter Olympics. It was announced during the 123rd Session of the IOC General Assembly in Durban, South Africa, where the City of PyeongChang won by  63 votes, defeating rival cities Munich and Annecy.

The IOC President Jacques Rogge congratulated and praised the PyeongChang delegation for their outstanding portfolio and on winning the vote.

“PyeongChang presented a strong and inspiring project that enjoys massive support from the government and the public…I have every confidence that PyeongChang will deliver on its commitment and host excellent Games in 2018.”

“PyeongChang’s inspiring project sets out to have the heart of the Olympic Winter Games beating in the mountains. The South Korean project will leave a tremendous legacy as PyeongChang will become a new winter sports hub in Asia, allowing athletes and young generations to practice winter sports at home, be exposed to the Olympic Values of Excellence, Friendship, and Respect, and pursue their Olympic dream. I congratulate PyeongChang. The IOC looks forward to collaborating with them over the next seven years.”

The President of the Republic of Korea Lee Myung Bak, reigning Olympic figure skating champion Kim Yu Na, and the former Governor of Gangwon Province accompanied the South Korean delegation to the 123rd Session of the IOC General Assembly. They all spoke strongly in support for the 2018 Winter Olympics to be held in PyeongChang, Republic of Korea.

In the past, the City of PyeongChang led the votes in hosting the 2010 and 2014 Winter Olympics, however narrowly lost to rival cities Vancouver and Sochi in the final ballots. The CEO and Secretary General of the Canadian Olympic Committee, Jean R. Dupre congratulated PyeongChang on its victory.

“We wish the people of PyeongChang good luck on this exciting journey hosting the Olympic Winter Games…It is an event that can change a county, as we have seen here in Canada.”

“The Canadian Olympic Team looks forward to competing against the world’s best in this wonderful setting.”