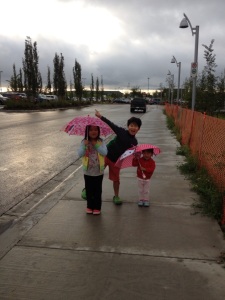 She lived in 5 different cities in her 7 Canadian years – Vancouver, Toronto, Calgary, Winnipeg, and finally Edmonton, where they settled last year. She says she liked Winnipeg the most. At the beginning, she didn’t like the small-city feel and underdeveloped circumstances, but people there were kinder and more warm-hearted and her neighbors actually made an effort to know her, unlike the other cities. Especially she remembers the 4 Winnipeg strangers who helped her when she had trouble with a flat tire. It was Saturday late afternoon, almost closing time, in the shopping mall parking lot. There were not many people, but seeing her in trouble and without her asking, 4 guys offered to change it and she was able to drive back home. She said that is one thing she likes about Canada and Canadians.

Suffering from morning sickness in the early stage of pregnancy these days, she happily talked about getting her mom’s food by air a few days ago.  When does she miss Korea?  She said she misses her family in Korea when she and her family are sick, when she has difficulties to find true friends, and when she feels isolated. As well she still has some trouble with the language barrier and sometimes feels ignored and treated unevenly.  And she added if the government hired more translators Canada could be a better place for immigrants.

What is her definition of “true success”? She said securing their residence visa and her husband having a secure job was number one before.  However, now they are starting to feel, as the kids grow older, that the true success they struggled for is for them to be responsible Korean Canadians and useful and active to both countries.  I asked her as a mother, what is her wish for the kids to be? The answer was rather simple. She hopes they grow as responsible people and live happy.   Living a life only seeing her husband just once a week for about 2 years with patience for their rosy future, she added one more hope, that they can have more family time before the kids are older.

What do you want to do 10 years from now on? She said I don’t know…maybe English study? I have seen her tough life sacrificing so much for the family, especially her kids, and I hope that the rewards they are already seeing continue for her.

She is too modest to mention it, but I think these days my friend Jinhee Choi is a success story in Canada.  They have bought a beautiful house, and while still driving her husband has obtained work which allows him both ample money and slightly more time at home. Her children have clearly benefited from the love and attention she gave them and are showing every sign of being intelligent, kind and outgoing.  And finally, demanding an exchange on a too-small pair of shoes is no longer a big deal to her.