Adventures in Cross-Cultural Maternity Part I: The Sample 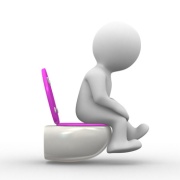 Sterile plastic cup in hand, I opened the bathroom door and blankly stared at the sparkling clean, disinfected squat-style toilet. I normally would have no problem with one of these. I had had many squatting successes, some even with little or no pee ending up on my pant leg or shoe. In Busan, these toilets tend to be exceptionally clean and even high tech. In the subway, the interiors of the stalls are often affixed with a small box that when one pushes a button, provides gentle sounds of the waves to help you relax – and go – in privacy (by the way, there’s an app for that).

Despite my general tolerance for the squatter, this time was different. There was no way I could do it without causing an embarrassing international incident. My physical talents had its limits, and I definitely reached my limit that day – I was eight months pregnant.

It might have been possible if I didn’t have to actually collect a urine sample, but the added task of having to hold a cup at the same time threw any of my past squatting achievements all out of proportion. The cup, the eight-month large belly, the altered centre of gravity and the toilet type itself – the odds were definitely against me.

I’d been living in Busan for a year and a half by then. I was comfortable there, enjoying a daily routine, feeling at home. The Jeil Women’s Hospital was a marvel for pregnant ladies  – especially coming from Canada, sorry to say. It was like a pre-partum paradise. No appointments necessary, short waiting times and an ultrasound every visit. Each visit I brought my VHS video and they recorded that month’s ultrasound on it, and I received a printout as well.

Yet in the space of a few seconds I had been reminded of my glaring foreignness. I realized that the toilet is also a cultural space – one that I hadn’t considered until just then – and this fact caught me by surprise and humbled me that day.

Head lowered in shame, I exited the toilet with my empty cup. The nurses’ desk was nearby, and Nurse Kwon looked up at me with her all-business, serious expression that she often had, and I said in my best Korean, “Waygooken hwajangshil odi issoyo?” (“Where’s the foreign toilet?”).

Covering her mouth to conceal her giggle, Nurse Kwon politely gestured with an open palm to another door across the hall. As I sheepishly turned away and walked toward it, I could FEEL her get up and walk over to the receptionist to confer. A few minutes later, as I exited my comfortable sit-down toilet, with sample in hand, Nurse Kwon and the receptionist stood together, both looking at me, trying not to look at me, and looking a bit guilty, and then me looking at them, knowing – all of us knowing – that I was the topic. I handed Nurse Kwon my urine. My cheeks were flushed, but I had accomplished my task for the day. In two weeks I would be giving birth here.