Taking Korean lessons has been one of the best investments I’ve ever made in my life. It sounds a little far-fetched, I know.  I mean, let’s face it.  You can’t really travel much with it, and speaking Korean is not likely to be the dealmaker at your next job interview.  Still, my Korean classes gave my Broca’s area the hot six-pack it had always dreamed of.  In short, learning Korean is the closest you’ll ever get to a legal lifelong magic mushroom experience.

And yes, it’s also a great way to talk with cute guys who don’t feel confident about speaking in English.

I know what you’re thinking.  That I’m just an ESL teacher with a nerdy and totally useless passion for languages who thinks grammar bootcamp is sexy.

Okay, maybe you’re right.  But flirting and drug-free psychedelic experiences aside, if you want to live the big Korean dream, you really need to learn how to text in Korean. Texting is a huge part of Korean culture, and although you can text in English, I’m pretty sure that texting was designed with Hangeul in mind.  I mean, have you seen how ridiculously fast Koreans text?

And if you still insist on being a lazy English speaker, then at the very least learn your emoticons. Koreans have taken the use of emoticons onto a whole new level.

I will never forget the time I was partying away with a few friends at a nightclub in Seoul.  We were doing “the rounds,” and as I passed by this one particular Korean boy, he smiled at me and did this: 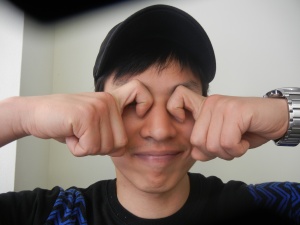 Being an emoticon peasant at the time, I did not understand what this gesture meant.  Fortunately, my Korean friend was there with me and he explained to me that I had just been given a “smiley face.”   Wow.  Talk about culture-specific gestures.  Whereas emoticons have normally always functioned as typed representations of our emotions, in Korea, it is our gestures which are now being adapted to imitate emoticons.

The list of Korean emoticons is long and not that easy to decipher for us Canadian simpletons.  So I’ve chosen what I believe to be the most common emoticons and shared them here as a little intro into the world of Korean texting.  Have you seen any of them before?

If you know any other fun emoticons that are used in texting, do share them with us in the comment space below!