There’s something about the North American ritual of going to the movies and sharing a large tub of salty popcorns. Movies and popcorns are as familiar a combination as it gets.  In the same vein, drinking beer or soju in Korea is universally linked to eating bar snacks (안주 “anju”). Chips, dried calamari, sausages, meat or fish jerkies, pork belly… there are limitless options for bar snacks but fried chicken and beer remains everyone’s favourite drink/bar snack combination of all time. In fact, streets of Korea are packed with “Hof + chicken” signs (Hof indicates bar or beer hall) not unlike the one shown above.

What’s so special about the fried chicken? Well, it’s rather difficult to blanket them all into one category (sauces alone would merit many sub-categories). But according to New York Times, the unique quality of the Korean-style fried chicken comes from the frying technique that renders out the fat in the skin, transforming it into a thin, crackly and almost transparent crust. 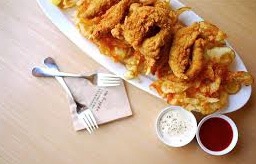 I had a chance to try some Korean style chicken in Seoul at a popular spot called The Frypan. Well-seasoned crackly chicken chunks came out on a bed of freshly made chips with a sauce on the side. After the first bite I knew I couldn’t live near this place without gaining 15 pounds on the first week.

One last note about these Hof and chicken places: Suppress your cravings for fried chicken for lunch. These are bars, first and foremost, and they don’t open until the late afternoon or evening. Bar snacks are not eaten as meals in Korea. It would be like eating a large tub of popcorn for lunch in North America.