Let me guess. You’re wondering what this post has to do Korean culture and Korea-Canada relations. All will be answered in good time. Now then, let us begin!

I had the esteemed pleasure of attending a much anticipated concert in Toronto at the legendary El Mocambo Tavern in Toronto, featuring popular YouTube singer-songwriter Clara Chung (aka Clara C). LA-based songwriter Aijia, and local Toronto acts Plaitwrights & Charleston Relay and another band whose name escapes me currently, all opened for Clara on the Toronto stop of this year’s fall tour celebrating the release of Clara’s new acoustic album “Organika”.

Clara, as you know, is an American citizen of Korean descent, and therefore in a way her concert helps celebrate that relation between Korea and Canada in a more artistic sense. Having spent a good portion of the evening with her due to having bought a Fan Experience ticket, I will now share a more personal story of Clara Chung and of the concert.

Arriving at around 3:45pm on Saturday October 5th outside the venue, I could see the band still unloading their gear, and even getting a glimpse of Clara herself. I was too nervous to say hello, so I just stood there waiting to go in. About ten minutes later, I walk into the venue to find another band from an earlier gig finishing their set and some older people sitting by the bar watching. Eventually, Clara’s manager Jon comes out to see if any of the Fan Experience folks had arrived. He came up to a couple of people waiting near me and told them that there was a mix up with the time we were supposed to come, and that because they arrived in Toronto late, that the band would be doing their soundcheck around 5.

Finding myself with nothing to do for less than an hour, I was eventually befriended by two other Fan Experience ticket holders (who will remain nameless for privacy reasons) and we walked down Spadina together looking for food. An hour passes and we find ourselves back at the venue, now with VIP bracelets on our wrists. Clara and her band are doing soundcheck for a little bit, then they step off the stage to let the other bands do line checks. Clara then approaches us and the other Fan Experience folks that came later and introduces herself to us, one by one. She then proceeds to tell us that she wanted to grab dinner since she hadn’t eaten, so we took off from the venue, literally walking out around her like a big mob, to keep the other fans waiting in line from seeing her.

We walked down Spadina for a good 15 minutes looking for somewhere to eat, until finally we ended up at a Korean place on Dundas and Spadina. Since most of us had eaten already, Clara was the only one grabbing dinner to go – bibimbap. While waiting for the food, and even while walking around Spadina, we spoke with Clara on a variety of things. Of the questions I had asked her, her answers were very sincere:

In regards to folks she knows singing in Korea: “I like know nobody in KPOP, except for Jay (Park), because he’s my friend haha. Oh and Ailee too. Ailee deserves all the recognition she’s getting in Korea right now, she’s super talented.”
In regards to her participation in the ISA! game show: “That was so much fun filming that show. I know there’s already shows like that in Asia, but I really think that the ISA folks should keep making more episodes. We have really cool and funny friends and so it was an awesome experience to just be goofy.”
In regards to future activities: “I’m thinking of releasing a Christmas album…would you guys buy it if I did? I’m thinking mostly originals, and maybe a few covers.” (Later on, she also spoke on the possibility that she could see herself moving towards a sound that mixes electo, indie and acoustic work, with regards to her overall style)

We talked about a bunch of stuff during that point, and while I can’t remember a lot of it, we definitely got to see a more down-to-earth side of this songstress. We walked back to the venue with time to speak with Clara more about what TV shows she was watching, people on YouTube she wanted to work with, her friendship with KPOP singer Brian Joo (whom I have a personal connection with also), and even getting to speak with her tour band and her manager Jon. 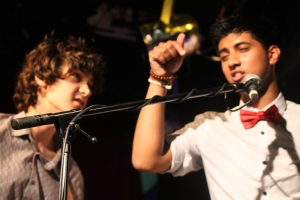 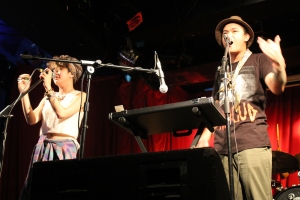 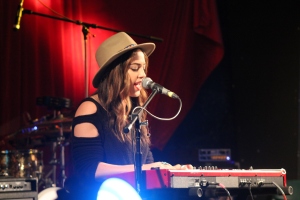 7PM rolls around, and the first band comes on stage. While I don’t remember their name, they were really good. A local rock band from Toronto, they helped to get the crowd excited. I wasn’t able to take photos as I was watching from backstage. Once this band got off, we got shuttled out to the very front row to continue watching the concert. We were also given a free physical copy of Clara’s new album. Plaitwrights and Charleston Relay came on next. As the winners of Kollaboration Toronto this year, they were no strangers to the crowd. Their set electrified the crowd even more, and their stage presence was so natural. Following their act was the LA singer-songwriter Aijia, who came from a long background of working with talented writers (one of them being the guy who co-wrote Bruno Mars’ hit song “Treasure) and bringing a vibrant style to the table. She brought the mood into a more chill ambience, to get the crowd ready for the star of the night. 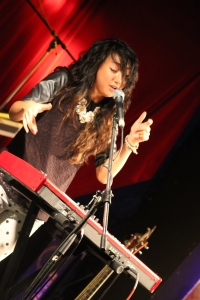 At around 9PM, Clara and her tour band finally hit the stage and kick off the night by performing two versions of her hit song “Heartstrings” – the re-worked version on “Organika”, and the original version. Early on in the show you could hear cheers, whistles, people shouting random things that got Clara to respond, most of these being responses to playing certain songs again or playing an encore prematurely. From then on, the show picked up. Clara played songs like “Quesadilla”, “Fish”, “Offbeat”, “Wanting What I Need”, and many more including a cover of Lorde’s “Royals” and Far East Movement’s “Rocketeer”. What really got me though was her new song “Nayelli” which was based of the story of how she sponsored a child from Latin America named Nayelli. Before singing her new song, she spoke about how she felt convicted to do more for others and not herself and how she partnered with World Vision after sponsoring her child. It was in that moment that I learned just how much more of an inspiration Clara was.

Finishing her set, she came back out to the cheer of the crowd going “encore, encore” and sang “Offbeat”. Getting off the stage after the end, she went to meet up with the Fan Experience/VIP ticket holders for the meet-and-greet. When it came time for me to take photos and sign autographs, as she was signing my CDs, I told her how honoured I was to meet her and how much of an inspiration she was to me. She look up and looked me in the eyes and said that it meant a lot to her to hear that. We took a couple of photos together (see below) and she also shouted my YouTube channel out (see link at the end). Afterwards, she hugged me and said she was so happy to finally meet me and put a face to the name.

Leaving the venue, on my way to catch the streetcar home, all I could do was grin. This was probably one of the most memorable opportunities I had been given the chance to experience. I met a lot of great people that night by making a networking event out of it, got to hear some great music, got some awesome merch, and finally achieved my four-year long goal of meeting and seeing Clara Chung perform.

All in all, you could say, it was a memorable night, at the very least. Also, I got to hear her speak Korean at dinner, and she said she’s very much proud of her Korean heritage and how Canada is supporting their relations with her motherland.

Thank you guys for reading! Until next time!