If you want to have a romantic moment with someone you like? I guess Han River is a place for you! In Korean dramas, guys drive their girl to Han River, stop there, take a walk, sit on the stairs, and confess that they like the girl. If they are already in a relationship, it is the time to show your love to her! Interestingly, there is usually a firework. Can they even do it privately? I don’t think so unless you are super rich, but those romantic scenes always make me get jealous of the girl! 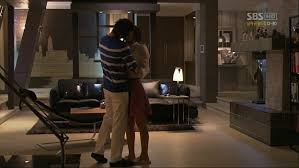 Girls are too shy to kiss in K-drama? I would first say yes, but they funny thing is that they eventually kiss the guy and start enjoying it! Before they kiss, the girl is usually mad at the guy. The girl starts crying and tells the guy everything she thinks he did wrong. They guy tries to calm her down by hugging her, but she refuses to hug him. All of sudden, the guy kisses her to show how much he cares about her and loves her. The thing is, the girl doesn’t refuse to kiss him! I mean, if you were mad at him and shouted at him, aren’t you supposed to get away from him? In K-drama, girls’ eyes get big first, and raise their tiptoes. If they were holding their phone, they drop it.

3. Poor Girls in K-Drama Always Have a Samsung Galaxy

Last thing that my friend finds funny was poor Korean girls in Korean dramas always use a Samsung Galaxy! The smart phone that Park Shin Hae in The Heirs is Samsung Galaxy Note 3, the newest Note series. My cousin in Korea bought the same phone as Park Shin Hae’s, and she paid ₩1,000,000, which is almost a grand in Canadian dollar. I don’t think this girl who works part-time to support her poor life is able to pay that much money for her phone. People know that poor girls in K-drama use an expensive smart phone for commercial purposes, but it still doesn’t make sense.

I love Korean dramas because of these funny facts. These funny facts create fictional but innocent and romantic atmospheres throughout the episodes, and that makes people in other countries get into Korean culture rather than watching Gossip Girl or Glee!

Thank you for reading my first post on Korean-Canada Blog! If you want to add more information or if you know any other funny things about Korean dramas, please comment below!