The first theme of Tasty Road to Korea is “3 Korean Food to Survive Canadian WInter.”  Korean Food is known for its hot and spicy flavor, which can help people in Canada to stay strong in the bone-chilling cold of the winter. Thus, the first Korean cuisine I will introduce today is “Potato Pork Bone Soup (Kam-ja-tang 감자탕).” 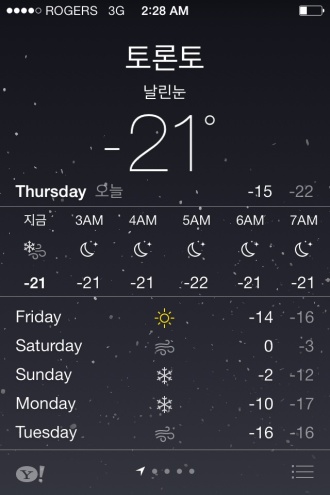 Potato Pork Bone Soup is one of the popular Korean cuisine in Canada. It is a hot spicy soup boiled with pork backbone, potato, radish leaves etc. In Toronto, among many Korean restaurants selling Pork Bone Soup, I and two friends of mine from Korea and Taiwan tried “The Owl of Minerva (미네르바의 부엉이)” on 5324 Yonge street (2 minutes by walk from Christy station).

Korean people put rice into Potato Pork Bone Soup and eat together. With one kind of Korean Kimchi named Kkakdugi (깍두기; cubed radish kimchi), it tastes much better. And after boning and eating meat, the left bones should be thrown to a given steel basket.

Both my Taiwanese friend who wanted to try Korean food and my Korean friend who missed Korean food liked Potato Pork Bone Soup in The Owl of Minerva. The price is inexpensive and the food is authentic. (it is exactly same with the one in Korea!) The restaurant seems to be already popular so that it was really crowded, but the service was still good.

How about a bowl of hot Potato Pork Bone Soup for the dinner today? You can stay warm all the way back  home even in the midst of the biting cold of Canada!