What Hallyu Can Do For You

Are you committed to learning Korean? Are you taking Korean studies? Do you aspire to go to Korea someday and possibly work or live there? If you’re like me, then the answer is yes to all of those. But this leads to a more complicated question: what could you do in Korea? 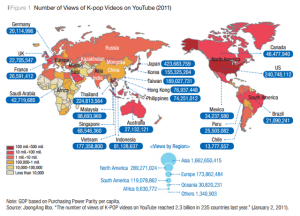 This chart is a bit outdated and I’m sure the numbers have only increased.

As I mentioned in my previous post, Hallyu has brought Korean culture to more than a few interested Canadians, and the results speak for themselves. When I first started getting really interested in Korean culture and media back in 2006, there were no websites such as Viki and Dramafever, there was no Eat Your Kimchi, and there weren’t countless YouTube channels streaming subtitled high-definition Korean media. The international Korean media community was much smaller in those days; if you wanted to watch dramas and see K-pop videos you had to dig a little bit. And Korean indie media? Good luck. Nowadays Korean content is extremely accessible, and that makes me pretty happy — not just because I can more easily access the media of one of my favourite countries, but also because I see opportunities for my future!

Fan or not, there is no denying that Sam Hammington has made his mark on South Korean media in a big way.

Over the past few years, South Korea’s various media outlets have shown greater interest in exporting their products overseas, and the unexpected success of Psy’s runaway summer hit “Gangnam Style” seems to have heightened that zeal. While at present the majority of Canadians likely don’t pay too much attention to Korean media, with first-year Korean classes at my university regularly filled to beyond capacity and the emergence of countless websites such as those I mention above, the signs of a heightened interest in Korean culture are plentiful. This relatively recent phenomenon got me thinking: if Korean media outlets are hoping to increase their international fan base, then they are probably going to need people who can speak Korean fluently and have good working knowledge of both Korean culture and the culture of their native country.

K-pop group, Teen Top is hoping to hit a number of Canadian destinations on their world tour through crowd funding. Let’s hope they come!

A number of foreign nationals have already managed to make a splash in Korean media, such as Australian-born television personality Sam Hammington and Canada’s own Simon and Martina of Eat Your Kimchi, to name a few. However, for non-Koreans (including Korean-Canadians) the market is still relatively unsaturated — though this is rapidly changing.

Vancouver-based all TV is one of many Korean media outlets operating within Canada’s borders.

I’m not suggesting that every Canadian who majors in Korean studies should attempt to become a Korean television or YouTube celebrity. What I am saying is that behind the scenes there are likely quite a few opportunities for those who are well versed in Korean culture, language, and media in spite of not having actually been born in Korea. Think about it. In areas such as marketing (including promotions), translation, tourism, and a myriad other cultural sectors in which non-Koreans are the target demographic, there is potentially a position that you might be able to fill. Even within the field of Korean studies, very little Korean literature, both historical and contemporary, has been translated into English — there’s a job there as well! 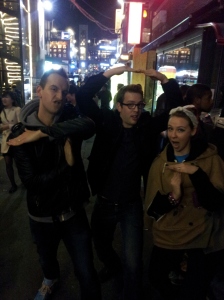 That’s Simon and Martina from Eat Your Kimchi and myself posing at Itaewon where we ran into each other by total coincidence – they are super nice and have have become very successful in promoting Korean media through their blog and YouTube channel.

Now, I am aware that a lot of the fields I’ve mentioned are niches and require a very specific skill set. However, my intention here is to get the mental gears turning. Not interested in the cultural sector? Korean businesses and manufacturers are constantly seeking to expand, and they will need staff who are culturally and linguistically savvy. Not interested in actually working in Korea? Canada’s All TV, Arirang TV, MBC America, KBS World, and all manner of other media outlets could use people with Korea-oriented skills.

Arirang Korea TV is another Canadian-Korean media outlet based in Toronto.

Is it easy to get jobs in these sectors? Probably not, but I feel that the demand will only grow. Ask yourself this: how many people outside of your Korean classes are actually learning about this rapidly growing market? In my experience, not a whole lot, and that means potentially more opportunities for those of us who are! In any case, I think it’s worth thinking about. If you’re the adventurous type, your future in a Korea-oriented job may very well lie beyond Canada’s borders. For me, at least, that’s a pretty exciting proposition.