Son Yeon-Jae has competed in 4 different apparatus including hoop, ball, clubs and ribbon, she showed a different style of music for each apparatus so that the spectators could enjoy a variety of performances..]

She performed her ribbon program to ‘Bahrain’ and received a mark of 17.150 and finished first, leaving a  very strong impression. Son Yeon-Jae also placed first by receiving 17.450 points in clubs program performing to ‘Luna Mezzo Mare’, meaning “moon that appeared upon the sea” by Patrizio Buanne. The mixture of music with her performance gave the feeling of fun and happiness.

Once again, she ranked first in ball program performing along to ‘You Don’t Give Up on Love’ by Russian composer, Mark Minkov and received a mark of 17.500 points. The lovely piano melody of the music definitely stood out and it was perfect to show the beautiful, elegant form of the program.

Son also performed her hoop program to ‘Don Quixote’ by Austria’s violin virtuoso Léon Minkus and placed third by receiving 17.500 points. She chose this piece of music, because she likes ballet music and wanted to show a classic performance as well.

.She scored a total of 71.200 points and brought an overall gold medal ahead of the silver medalist, Melitina Staniouta..

Son finished fifth at the 2012 London Olympics, however she has been showing a rapid improvement as she competed in multifarious international competitions and she is looking forward to win an Olympic medal at the 2016 Rio de Janeiro Olympics. She stated “I have been competing in more international competitions than before and I think that the quality of my performance is becoming more consistent as I gain the weight of experience.” 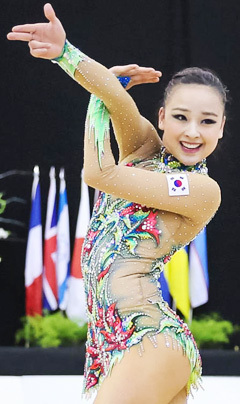 She is also planning to roll at the 2014 FIG World Cup Circuit in Pesaro, Italy on April 11th- 13th. The following week, on April 18th-21st, she is going to compete at the 69th Korean National Rhythmic Gymnastics Championship. She is also competing at the 2014 Korean Cup on April 19th~20th and she is going to perform at the LG Whisen Rhythmic All Stars 2014 Gala show on April 26th-27th. Then, she is going to head back to Russia at the beginning of May to train hard for the upcoming 2014 Incheon Asian Games this September. She is certainly looking to show her best there, and hopes to deliver the first ever gold medal to Korea, because the country has never won a single gold medal in rhythmic gymnastics at the Asian Games.

It is very important for her to lighten all the pressures and continuously do her best just like what she did in Lisbon in order to receive a new personal best and win again at the competitions.