Lecture at Rotary Club of Ottawa

On Monday May 5th, Ambassador Cho Hee-yong spoke at the Rotary Club of Ottawa during the “Rotary Adventure in Citizenship Program” with over 220 high school students in attendance, representing all regions across Canada.

Ambassador Cho inspired the young students to become future leaders of Canada by talking about the qualities and roles of diplomats, while also introducing a variety of issues in Korea-Canada relations such as the significance of the recent Korea-Canada FTA announced by President Park Geun-hye and Prime Minister Stephen Harper and the contributions of Canadian Korean War Veterans during the Korean War. 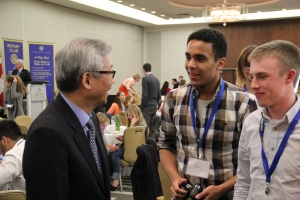