Remembering the 64th Anniversary of the Korean War

On June 21, British Columbia commemorated the Korean War with a ceremony in Central Park, Burnaby, hosted by the Western Canada chapter of the Korean Veterans’ Association.  The Korean War veterans and their families gathered together at the Ambassador of Peace Monument, and commemorated a solemn wreath laying ceremony.

It was a day of remembering the sacrifices that many people made for freedom and peace, and an opportunity to remind ourselves of some of the values we take for granted.  Senator Yonah Martin, a major champion of Canadian veterans of the Korean War, said, “We are here because of their sacrifices.”

Kim Il-Soo, president of the Korean Veterans’ Association closed the ceremony saying, “Korea was completely burned to ashes 64 years ago from the war, but has overcome so many challenges and achieved almost miraculous economic development.  The Korean community should continue to help each other and work together to become a prosperous and exemplary community and culture in Canada.” 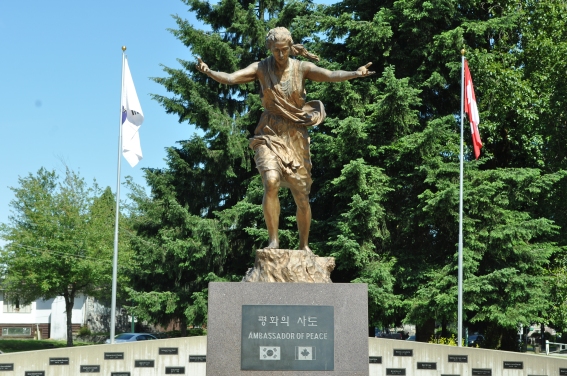 The Ambassador of Peace Monument located in Central Park, Burnaby

Many of the representatives from various organizations gathered including Senator Yonah Martin, the Korean Consulate, Ralph De Coste of Unit 24 KVA, and various veterans and community groups.

Members of the Korean Veterans’ Association gather to lay wreath for the fallen.