Pope Francis arrived in South Korea on Thursday, August 14th for his first trip to Asia as pontiff. This trip is the third pontifical visit to South Korea, since John Paul who traveled to the country twice, in 1984 and in 1989. 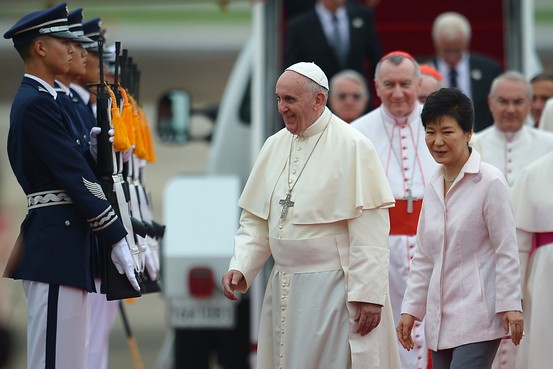 The central reason for Pope Francis’ Korea trip is Asian Youth Day which involves thousands of young Catholics from 23 countries, there will be a closing Mass on Sunday.

The streets leading up to Seoul’s Gwanghwamun Gate (광화문) were filled with thousands of people honouring the ordinary lay Catholics who founded the church here in the 18th century.

↑ View of the streets leading up to Gwanghwamun Gate

Pope Francis presided over a ceremony, and beatified 124 Korean martyrs on Saturday who were tortured and killed in the 18th and in the 19th centuries after refusing to renounce their faith. He told thousands of people who turned out for his open-air mass that their ancestors’ willingness to die rather than renounce their faith two centuries ago was a model for Asian missionaries today. A cheer erupted from the masses when Francis declared the 124 “blessed”, the first step toward possible sainthood.

↑ Pope Francis at the beatification held on Saturday

En route to the altar before mass, the pope stopped his open-topped car so he could get out and bless a group of families who lost their loved ones in the Sewol ferry disaster back in April, in which more than 300 people, mostly high school students, were killed. On his white cassock, Francis wore a yellow ribbon given to him by the families a day earlier when he met with them privately to try to console them.

The Pope Francis will return to Rome after holding a special mass praying for peace and reconciliation among the two Koreas at MyeongDong Cathedral in Seoul.