In the 1960s, South Korea started to broadcast television series (dramas) and they are very popular worldwide, partially due to the spread of the Korean wave. Korean dramas, also known as K-dramas are sold to many different countries with streaming services that offer multiple language subtitles. K-dramas enjoyed an immense public popularity worldwide in 2014 as well, with over 65 dramas just from public TV networks. So I would like to introduce some K-dramas from public TV networks that made a great hit in 2014, in case you missed it!

Jang Jae Yul is a mystery writer and a radio DJ. He suffers from an obsession. He then meets a psychiatrist named Ji Hae Soo. Ji Hae Soo is going through her first year fellowship in psychiatry at a University Hospital. She chose psychiatry because she doesn’t want to perform surgeries. After she meets Jang Jae Yul, her life goes through big changes. They end up becoming home-mates and things turn romantic. 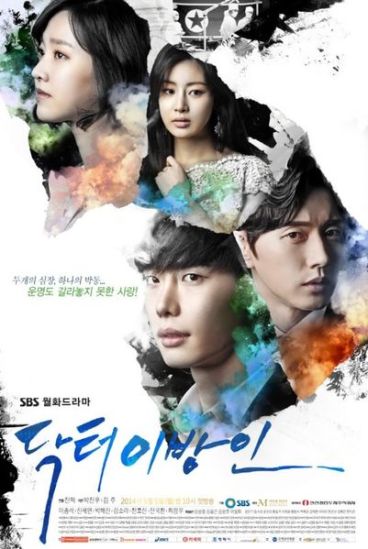 Park Hoon, a South Korean who was captured with his father and grows up in North Korea. He is trained to become a genius doctor, and though Park Hoon lands a job at the best South Korean hospital after defecting, he is treated as a foreigner. To find his lost North Korean first love, Song Jae Hee, he does anything to make money.

Three brothers lose their parents and grow up separately without knowing the whereabouts of each other for more than 20 years. Because they have taken on new names and are all grown up, they are unable to recognize each other later on. Jang Dong-Soo the oldest brother become a detective, while Dong-Chul the middle brother uses an alias name Heo Young-Dal to become the boss of a crime gang. The youngest, Dong-Woo, grows into a cold person after being adopted by a rich family. The three brothers’ fates become intertwined as they become bitter adversaries.

A single mom who has been only focusing on making money and achieving fame is suddenly finds out she has a time-limited life. All her life, she has been neglecting her only son so she now wishes to spend the rest of her lifetime for him finding his family before she leaves. She plans to reunite her son with his birth-father so he can live in a stable family environment, but the father is already married to someone else. This is a story of 6 months of motherly love and sacrifices that is told by a terminally ill mother.

Ki Seung Nyang, a Goryeo-born woman who ascends to power despite the restrictions of the era’s class system, and later marries Emperor Huizong to become an empress of the Yuan Dynasty, instead of her first love Wang Yoo. The series depicts her loves and political ambitions as she is torn between the two nations.

A mysterious messenger of the 22nd century, an online newspaper reporter who only concerns her own interests, a popular reporter who agonizes over the truth and reality. When these three people meet, a passionate romance starts and the truths from the past and present reveal themselves to the world. This drama features young people and how they grow into real reporters.

A young woman from a wealthy family goes missing and is raised by a foster mom instead of her own parents. Meanwhile, her wealthy family adopts a girl to overcome the loss of their daughter. The tensions that arise when the daughter finds her real family result in a journey of understanding and forgiveness.

Do Min Joon is an alien who came to earth in 1609 and lands in the Joseon era, then lives through the next four hundred years to the present day where he works as university professor and falls in love with a haughty top hallyu actress, Chun Song Yi.

The drama depicts the last six months of Park Jung Hwan’s life, one of the prosecutors working on anti-corruption department. Before the brain tumor takes his life, he is determined to expose the frauds and misconducts committed by his superior, Lee Tae Joon. He also struggles to make amends with his ex-wife Shin Ha Kyung and their daughter Ye Rin, for all his indifferent attitudes in the past.

The drama depicts love, frustration, growth and the competitive process of young people in their 20s becoming reporters as they cry and get hurt by truth but realize that as reporters, they must tell the truth. It will center the story of a man who hides a special talent living under a fake name and a woman who cannot lie due to ‘Pinocchio Syndrome’. The story is about how important news reporting the truth. It revolves about how life’s at stakes if lies are reported as news.

* Again, I am to inform that this is just my personal opinions. Comment below if your favourites are not on the list, I’d love to read them all! :)