I enjoy introducing Korean culture to my friends, and I have come to learn that food is a great way to show the vibrant colors of the culture. In my first year in Canada, my mom with her excellent cooking skill, certified by several cook licenses including one in Korean cuisine, often invited our neighbors over to try Korean food. Her professionalism shone through the presentation of the food. For most of our neighbors, it was their first time trying Korean food, and they liked 비빔밥/Bibimbap especially for its colorful toppings and how they are neatly put on the steaming white rice. Since then, 비빔밥/Bibimbap has been my top choice of recommendation for friends trying Korean food for the first time.

비빔밥, pronounced as ‘Bi-Bim-Bap’, is a rice dish mixed with vegetables and beef. 비빔(Bi-Bim) means mixed and 밥(Bap) means rice. It can be served in a normal bowl or a sizzling stone pot called 돌솥/Dol-Sot. From now on, I will refer to it simply as 비빔밥 without the romanization.

In my first year of university, I met Julie who has just moved to Canada from Japan. She has been my best friend since, and I can’t count how many times I had 비빔밥 with her. We have indeed tried a variety of cuisines, but whenever I let Julie choose the menu for us, she says 비빔밥 with certainty. She likes how there is just enough amount of meat and vegetables in 비빔밥.

When I went to Japan to visit Julie, I got to try どんぶり/Donburi, which is a similar dish to 비빔밥 in its presentation. One thing that surprised her when I tried どんぶり was that I immediately started mixing the contents in the bowl like I would do with 비빔밥. Julie let me know that forどんぶり, it is considered inappropriate to mix the contents, so when I told her to mix 비빔밥, she at first felt uncomfortable doing it. Now she is a 비빔밥 expert.

These are some of the photos she took of her 비빔밥. 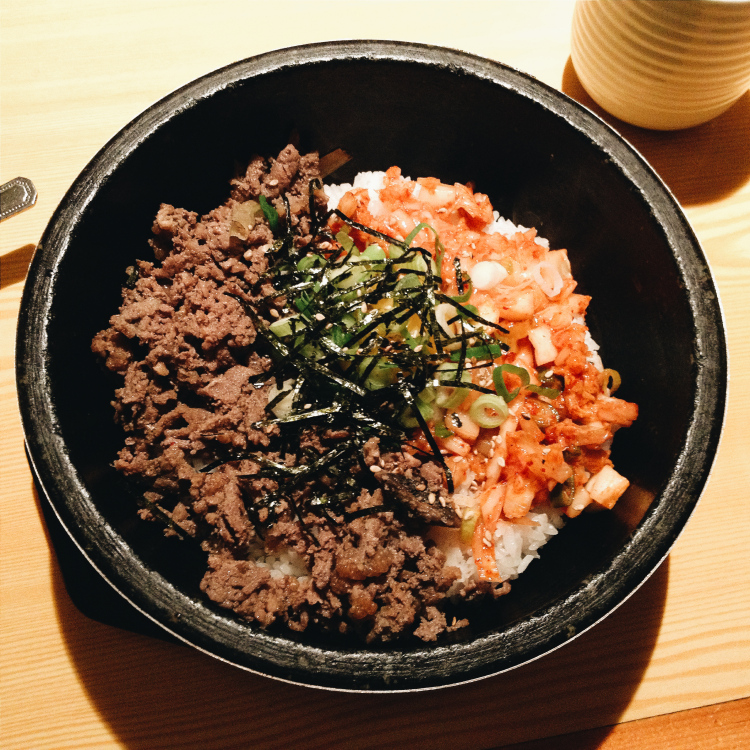 She even made one by herself. 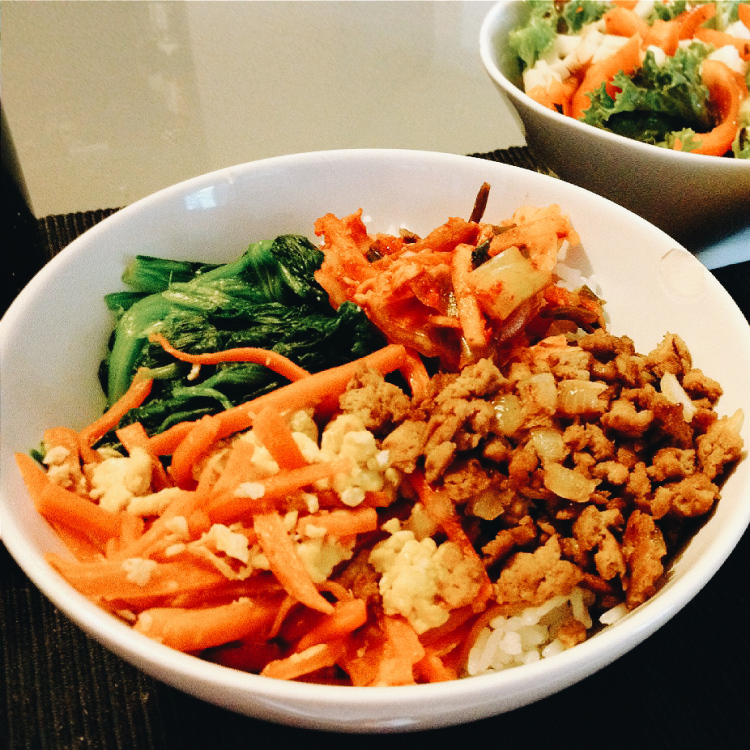 Julie was as excited as I was when I proposed that we introduce Korean food to our friend, Mayte. We have been working together on the executive team for the UNICEF chapter at our campus. It has been a bit less than two years since Julie and I first met Mayte, and we have eaten out together several times, so it came to my surprise that I never introduced her to Korean food until our most recent U of T UNICEF social. The executive team has tried different menus such as Indian, Ethiopian, and Japanese, and this time, we decided on Korean food when Mayte mentioned that she had never tried Korean food before.

Mayte told me she has tried other East Asian food before. She likes Japanese food, and naturally due to her family background, she is used to the spices of South American cuisine. When I asked her whether she is worried about the spicy pepper paste that goes in 비빔밥, she smiled and said she will be fine since she can handle the strong taste of cayenne pepper. Personally, I can’t handle hot taste of pepper, so I was impressed with her tolerance.

While we waited for the food, I explained to her what 비빔밥 meant. When she realized that the word literally meant mixed rice, she showed interest in how Korean words work and figured out that she could find the parts of the word 비빔밥 in names of different menu, for example 비빔냉면/bibimnaengmyun (mixed noodle) and 볶음밥/bokkeumbap (fried rice).

The photo below is Mayte trying her 비빔밥 for the first time.

Mayte’s overall impression of 비빔밥 was positive, and she especially liked how it was easy to digest. She said she would be happy to introduce her family to Korean food in the future.

Special thanks to Julie and Mayte who agreed to be featured in this blog post.