Sorry to say this to our Barclay’s Premier League players, but this is the more exciting part of the current South Korean players this year. With 6 South Korean players, just waiting for their moments to shine every single game, this is the league to be excited about South Asian players. However, if Premier League is more of your taste, click here for Part 1 of the Aftermath of Asian Cup 2015 on Korean BPL players.

German Bundesliga is just growing South Korean players out of its pockets and is also being very supportive of them playing week and week out. All the South Korean aces are currently performing at top level and continuously growing to be even better players for the club and for the nation. Here are players that we will talk about in this article: Son Heung-Min (of course), Kim Jin-Su, Ji Dong Won, Park Joo Ho, Hong Jeong-Ho and Koo Ja Cheol. It is amazing to see how much of the Brazil World Cup 2014 winners are playing in this league and how our homegrown players are still performing well against them.

He may not have been in the squad for the AFC Asian Cup for his lack of playing time at his 6 months in Dortmund, he signed for the third time at FC Augsburg. After his comeback at FC Augsburg, he has already started to adjust to the club and played a big part in the win against his old club, Borussia Dortmund. His tenacity and his willingness to get in the box won the winning goal for Augsburg. Given his talent and his surprising work ethic, this player is one to keep on eye on. 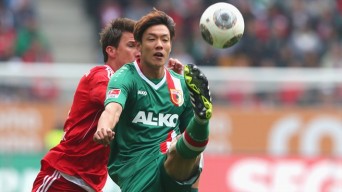 Welcoming his new teammate Ji, Hong Jeong-Ho has been a big part of FC Augsburg in their reign at 4th on the Bundesliga table. Playing as one of the substitute for this team, the 25-year-old defender have been struggling through injury keeping him out of the Asian Cup and in Bundesliga playing in 9 of the 20 games so far this season. As back-up player, Hong has been so crucial in FC Augsburg‘s league position. Sitting strongly at 4th, FC Augsburg is beating all the expectation of the club and competing against the top teams in the world. Exciting to see his contribution at the club.

Captain of South Korean squad, the one of the most acknowledge players playing international games. Also one of my favourite players to learn from as well. The South Korean captain who led the team to 3rd place glory in the Olympic Games, is struggling to nail his place in the first team along with his teammate as he returns from injury from Asian Cup. He has scored once on 11 games at this season so far for 1. FSV Mainz 05.

One of the South Korean players to emerge out of J-League. A Multi-positional player who can be deployed in defence and in midfield as seen through out the AFC Asian Cup. With such high expectation, he is still continuing to make a mark in the German Bundesliga. Playing with his teammate Koo at 1. FSV Mainz 05, they are working hard to keep their place on the first team sheet.

Definitely the most improved this year and after the AFC Asian Cup 2015. The TSG Hoffenheim left-back was the first Korean player to get back on the team after his leave for Australia. The 22-year olds, Kim Jin-Su and Son Heung-Min are the most exciting players to watch out this season and as the future of South Korea. This new rivalry between the South Korean internationals will be exciting for the years to come. The true attacker-defender rivalry between the two Koreans since Park Ji Sung and Lee Young-Pyo, if I might add.  Here is a 12 minute clip of Kim Jin-Su against Werder Bremen.

Saving the best for last! 91st minute strike may not have been enough for the Taeguk Warriors to take the cup, but he was the one of the key players of the AFC Asian Cup at Australia. It must have been hard to have so much of the pressure of the nation on his shoulders to perform week in and week out. The second highest scoring player in Bayer Leverkusen player this season is definitely the Son-sational player. Watch this quality game with the recent Son’s hat-trick special.

The future of South Korea in its football quality is bright as these players continue to perform in the local league of the current World Cup holders.