So who here is excited about the 2015 Women’s World Cup in Canada? I know I am. I already got my ticket for the game and it is going to be one of the highlights of 2015. Hopefully we get to see all of you lovely fans supporting our colours!

Women’s soccer has been a very under-rated sport for decades, but it really is one of my favourite sport. With the lack of support, they do not get a chance to compete constantly. WK-League (Women’s K-league) still lacks the A-Matches (international games) to compete in a higher level. Women’s Soccer is very fast paced, powerful and skillful. Absolutely a blast to watch. With the growing interest in soccer in North America through MLS and newly built stadiums, this is an exciting time to be a fan of Women’s World Cup.

Recently, the South Korean Taeguk Female Warriors have brought us many news including the squad registration! 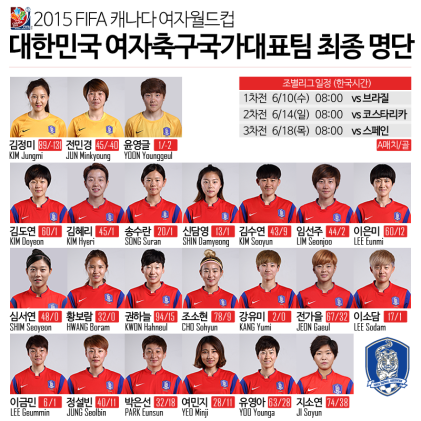 Before it is too late, we should get to know some of the crucial members of South Korean Taeguk *Female* Warriors! Enjoy this clip of South Korean Female Warriors’ forcing 10:0 in the preliminaries.

First is our UL-ZZANG Shim.

My favourite player out of the list, but I will try my best to not be biased.

Born in 1989, with height of 170cm, she is the heart of the defence with confidence. Although she is only 26, she is a strong presence in the field uplifting the teammates with authority and in the media to bring support for WK-League. Playing for Goyang Daekyo WFC, she has 48 A-Matches under her belt.

She is recently back from injury and we really hope to see her on the field!

She has been recognized by the media as the 국대얼짱 (national team beauty) of the Korean team and will continue to help WK-League grow. For more infomation on Shim Seoyeon, check this interview.

Next are our exciting forwards! 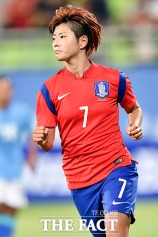 Another WK-League superstar. Jeon plays for Hyundai Steel Red Angels. Such a talent at 26, she has breathtaking footwork and pacey as well. Although she is not as recognized as our next player, Jeon has 67 A-Matches and an unbelievable 32 goals from international games. With quick turns, pacey dribbles with close touches, her footballing style is very similar to Eden Hazard from Chelsea.

Check this interview for more information!

Lastly, the most successful player who is working hard to let the world know about the strength of South Korean Taeguk Warriors.

Recently named Professional Footballers’ Association Female Player of the Year after a single season with the team, Ji So-Yun is the first female korean player to ever play in England. Her dream is to be like Ji-Sung Park and bring the attention to the world how strong South Korean soccer is.

She started her career in Japan similar to Ji-Sung Park, and now she is already the superstar of Chelsea Ladies FC. Incredible 38 goals in 74 A-Matches, playing as a striker or in midfield, she is known as the Female Messi in the media. Close touches on the ball and the calm finishing has brought the club to be top of the table. 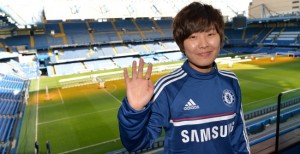 She’s won it all so far:

We wish her the best time in the World Cup and we are so excited to cheer for our proud nation.

Recent news have stated that one of the players Yeo Min-Ji (여민지) will not be able to attend the World Cup due to a serious injury in the friendly game. We pray for her fast recovery. The Taeguk Nangja (Female warriors) have also been given the first ever World Cup send-off ceremony on May 18th.