D-day once again! This time against Costa Rica at 7pm inside the legendary Olympic Stadium in Montreal. (Saturday June 13). With the four strong team team in Group E, this is going to be a challenge for the Taeguk Ladies.

Last game against Brazil was an eye-opening experience. It was a very tough game for our South Korean Taeguk Ladies. With the physicality and great open play from the Brazil ladies, Taeguk Warriors were pushed to the limit as the game ended 0-2. The 2 goals were unfortunately given away by minor defensive mistakes, and our players were disheartened by the pressure Brazil put on by smart passing and open play. The direct pass to our keeper, Kim Jung Mi (김정미), was intercepted for an easy goal by Formiga and soft penalty call lead to a goal by the notorious Female Neymar, Marta.

But at the last couple minutes of the game, there were moments of magic by Jeon Gaeul (전가을) and her efforts of driving Korean mentality back up. This showed a lot of desire and passion from the number 7 and is going to be the outlook for this coming game with Costa Rica. Although we were unsuccessful in making so many on-field plays, we now will be facing the underdogs, Costa Rica.

FIFA Women’s World Cup Canada 2015 is the first World Cup appearance for our opponent. Costa Rican national football team, however, have one of the main teams in the CONCACAF Women’s Gold Cup. Ranked runner-up in 2014, third place in 1998, and fourth place in 2002 and 2010 for the Gold Cup, Costa Rica shows promising signs of being a great team. Costa Rican team is currently ranked in 37th on FIFA Women’s Ranking, although they are a younger team between the qualified teams. 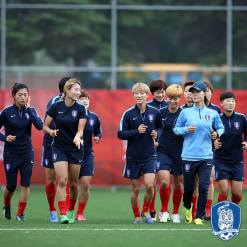 They play a progressive 4-3-3 formation, most likely emphasizing on their fast paced offence. The Costa Rican squad is younger, which means they may have a lot more stamina throughout the game. Instead of rushing the game, short passing tidiness will be required throughout the game. Rather than focusing on the width of the field, it would be a great idea to start from the centre and use our technicality to our advantage.

Some of the well-known players are the 29 year-old captain, Shirley Cruz, who plays for Paris Saint-Germain (PSG), Katherine Alvarado, and some young players like Melissa Herrera.

Shirley Cruz holds their armband to lead the midfield in a calm but exploding manner. She holds 61 caps, and 21 goals in international matches. Raquel Rodriguez, the goalscorer against the match against Spain, (which ended in a 1-1 draw), is also a strike force to be reckoned with, scoring 25 in 38 international matches. Their squad includes 18-year-old Melissa Herrera and the15-year old Gloriana Villalobos showing their trust in the young squad. 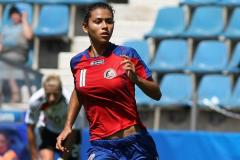 This is a very important game for the South Korean Tigers as this could be the defining game for their road to FIFA Women’s World Cup Canada 2015. This match could very well show the chance of being in the Round of 16 due to the loss to Brazil. With the possibility of having two games left in the tournament, This will require a lot of mental strength in the game.

Hwaiting Taeguk Ladies! We will be cheering for you in Ottawa Korean-Canada Embassy!