Have you seen my earlier post about slang? You can find it here: Slang/Abbreviations/Emoticons [2014 Edition] 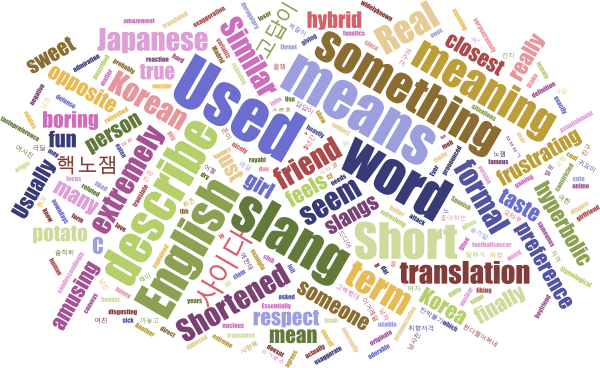 An extremely popular topic for people interested in Korea or Korean seem to be Korean slang. New slang words are constantly devised, and it seems impossible to keep up with the latest trends. Younger generations, not only in Korea but worldwide, are notorious for the modification (or destruction as perceived by older generations) of language. It seems hard to understand the meaning of these slang words, especially if you are not a part of the users of the slang, or young Koreans for Korean slang.  The latest fad in Korean slang culture seems to be the use of consonants, or 초성, such as ㄱㄱ (short for “고고” let’s go/go,go in Korean). This allows for heavily shortened slangs, leading to less typing but more difficulties in deciphering them. I have an earlier post regarding slangs in 2014, which covers some basic slangs that are still used today. However,everyone knows it now, so what’s the fun in that?  Let us try to delve into even more obscure slangs that are used in the more exclusive communities, mostly young internet users in Korea. As a native speaker of Korean, and part of the younger generation (but still mature enough (; ), I will try to explain some of the latest slangs used in Korea. Let’s ㄱㄱ!

Here is the list of slang, with their respective definitions.

ㅇㄱㄹㅇ: Is short for “이거레알”, which in English means “this is real.” This slang is similar to English slangs such as “so true,” “true dat,” and is used when the user agrees and relates to the subject. Why is the word “real” pronounced as “레알” (ray-ahl) here? This seem to stem from the Spanish pronunciation of “real”, widely-known in Korea due to the famous club football/soccer team Real Madrid CF.

ㅂㅂㅂㄱ: Is short for “반박불가,”which in English means “unable to be refuted.”

ㅅㄹㅎ: Is short for “사랑해,” as many of you would know means “I love you.”

ㅂㄹ: Is short for  “별로” This is hard, since there doesn’t seem to be a direct translation. The closest translation I can muster up is “not really” or the English slang “meh” seem to translate nicely.

ㅇㅉ: Short for “어쩔.” Meaning “so what.” Often used condescendingly.
사이다: This is a slang that is heavily used in Korea nowadays. What does it mean? It is used to describe situations that are refreshing or relieving .
This slang probably needs an example to be explained better:
B: 존이 3년간 좋아하는 애한테 드디어 고백했대! (John finally asked out that girl he liked for 3 years!)
C: 와 사이다! (Whoa, finally!) –> It is used to show how “refreshed” person C feels.

핵노잼: “핵” is used informally as a form of exaggeration (i.e. to mean very/extremely), but has a formal definition of “nucleus” or “nuclear.” “노잼” is a hybrid of the English word “no” (노) and the Korean shortened version of “재미” (잼), which translates to “not amusing” or “boring.” The slang overall means to be “extremely not fun” or “extremely boring.”

꿀잼: “꿀” is a formal Korean word for honey. The opposite meaning of “핵노잼” and means “very amusing” or “quite fun.”

극딜: This originate from gaming slangs, and means to focus on attack while giving up on defense.

솔까말: Is a shortened word for “솔직히 까놓고 말해서” which means to be honest. Similar to the English slang “tbh.”

취존: Is short for “취향,” which can be translated to “preference,” “liking,” “taste” and “존중” which means to respect. The slang means to respect someone’s taste or preference for something (no matter how weird it may be).

취향저격: This is a slang term used to describe something that is exactly to one’s taste/preference. “저격” is a formal Korean word, and means to “snipe”.

극혐: Short for “극한” meaning to the extreme, and “혐오” meaning disgust. Used to describe something that is extremely disgusting.

쩐다/쩔어/쩌네… and many other variants: used as a hyperbolic reaction to something, which usually conveys amazement, astonishment, admiration and such. Similar to the English slang “sick.”

찌질이: This is a derogatory term, and should not be used. The closest English translation is “loser.”

간지: Etymological origin from a Japanese word. Used to describe something “cool” or “stunning.”

닝겐: Is actually a Japanese word, and means “human.”

개~: Another hyperbolic word used to exaggerate something.

귀요미: Used to describe something that is very adorable or cute.

I think these should be enough words to fill your brain with Korean slang. I will soon write an update post, so stay tuned. Otherwise, checkout more posts on Korean slang written by other authors in this blog too!