Every week, a number of Korean music broadcasts feature current Kpop songs on popular shows such as Inkigayo, Music Bank, The Show, and more. I recently had the chance to be part of the live audience for the filming of M! Countdown, Mnet’s music countdown show, and it was a dream come true!

When planning my trip to Korea, I had the idea that perhaps I could attend one of the major music shows during my stay, since it’s a great way to see multiple groups at once. A little research told me that it can be quite difficult to gain entry, whether for early morning pre-recordings or for the evening live show. In general, you can’t simply buy tickets for these performances. Many Korean fans have to fulfill a number of qualifications through their favorite group’s fanclub before they can earn the right to be in the audience.

In my searching, I happened to find information about a special package offered by SMTOWN Travel called M Cultour. This foreigners-only tour allows visitors to Korea to buy tickets – singles, or pairs – to attend an M! Countdown show.

Getting the tickets proved to be tricky, because they go on sale in the last week of the previous month during the afternoon in Korea – and this is late at night in Canada. Nevertheless, my friends and I set out to try for some as we had a couple of dates that would work for us. I followed their twitter account (@SMTOWNTRAVEL) for updates, and downloaded their app as well. Both proved helpful in obtaining tickets.

In the end, we were actually in Korea already when the slots opened for June, so after much refreshing we were able to snatch a pair and a single. (We also needed some help from the SMTOWN Travel staff to make a slight adjustment to our order, and they were both efficient and courteous.) We were off to M! Countdown!

On the day of the show, we found our way to the CJ E&M Centre by taking the subway to Digital Media City station and then hopping on a bus. It was raining lightly and we rushed into the building because we didn’t want to miss our check-in time, which was between 3:10 and 4:20 pm. After getting bracelets to indicate the order we arrived, we were free to walk around until the meet-up time. Even in the lobby you could spot Kpop celebrities passing through as they entered a different part of the building; my friend briefly saw ONEUS and was thrilled! 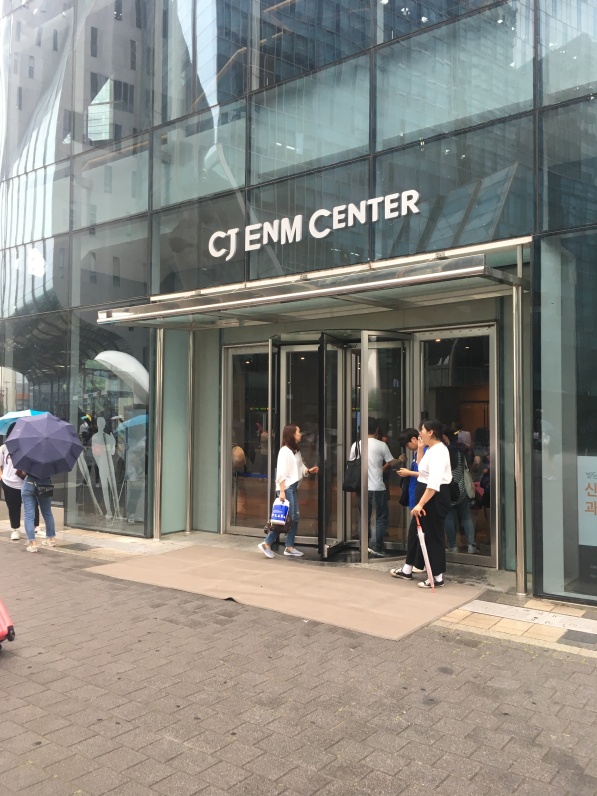 After a quick Starbucks run next door we assembled into our group (the English-language group – they also offer Japanese and Chinese) and lined up in the lobby. They handed out some freebies for us, which in our case included SM artist stickers and Wanna One LED fans (as a Wanna One admirer, this was a bonus for me). Then they led us up the open stairs to the second level. Most of our group was able to sit down on the floor here, but the rest of us didn’t fit, so they had us sit on the next set of stairs to wait for the right time to enter.

Next they allowed the fan groups that had been waiting outside to come in and line up behind us. These were the passionate locals who had checked off the right accomplishments to win a spot in the audience, and it was fun to guess which groups they were supporting by the light sticks and banners they held as they walked by. I admired them for waiting so patiently in the rain and was glad that they were able to come in and dry off before the show started!

We did have to wait for quite a long time at this point – about an hour and fifteen minutes – while the staff prepared for the show. Again, we spotted a couple of groups as they went by, and were able to wave and say hello. They had already warned us that we were now in the zone where we were not allowed to take pictures or videos, so we were determined to fully enjoy our time in the moment.

Finally, they opened the door to the studio and ushered us in, keeping the same order that we had established before. Even peeking in at the dark studio with its neon lights sent a shiver of excitement through me. It was standing-room only and since our group was smaller we were able to find a spot in about the fourth row from the front, with a great view of the stage.

M! Countdown features 20 different artists in a two-hour timeframe, so to accommodate all of that into a show, some of the performances are pre-recorded. While this meant that we didn’t get to see all of the songs live, we did see the majority of them, as many of the groups who had pre-recorded also came to the live show and performed part of their song for us while the pre-recording showed on TV.

One of these groups was ONEUS, who actually did both – they performed English Girl live and then a little bit of Twilight, which they had pre-recorded. Despite being rookies, we were dazzled by the talents they showed, and although they haven’t yet won first place on a music show I feel that it’s only a matter of time.

There were a number of girl groups making their comeback in early June, so we were able to see performances by WJSN, fromis_9, Weki Meki, Lovelyz, and CLC, as well as rookie groups Cherry Bullet and BVNDIT. There were some fanboys in the audience who were very enthusiastic when they called out the fanchants for their respective groups!

A couple of boy groups that also stood out to us were D-CRUNCH and IZ, both just getting started in their careers. One of my friends is fairly new to Kpop and she picked out these two groups as her highlights, commending D-CRUNCH for their energy and fun, and IZ for playing instruments under pressure – particularly since the drummer lost his drumstick partway through and had to complete the whole song with his hand!

Our June 6th show also featured two songs from TEEN TOP, who I listened to in their early days, and a solo single from Sandeul of B1A4. It was nice to see some veterans among so many new artists. TEEN TOP was surprisingly playful, especially when they did a little of the dance for their pre-recorded track Run Away, while Sandeul looked completely at ease behind the mic.

We also had the fortune to see one of the groups from the current Kpop survival show Produce X 101 during our M! Countdown visit. Unfortunately, they had pre-recorded their performance of BTS’s No More Dream, so they were only on stage for a brief time, but as a passionate fan of Produce I was very excited to see some of the trainees.

Of all the songs that were performed live, my absolute favorite was Breathe by AB6IX. This re-debuted group of former Wanna One Members Daehwi and Woojin, MXM members Youngmin and Donghyun, and new addition Woong was already part of my regular playlist, but I was even more impressed seeing them in person. Their performance was professional and powerful, with amazing choreography, but also had space for them to acknowledge their fans with smiles and waves at the end. (Daehwi was also a host for the show, but since the MC clips are filmed at the back of the studio I didn’t get much of a chance to see him at those times.)

Although it all went by so fast, being able to see so many groups live and to wave and cheer and sing along with an audience of Kpop fans was a wonderful feeling! There was a camaraderie among the people there that made the experience personal and meaningful. I would certainly go again if I had the chance, and would recommend it to any Kpop fan.