By jessica1229 on December 20, 2013 • ( Leave a comment )
On Thursday December 12, the Embassy of the Republic of Korea presented its 14th ‘School Visit Program’ by welcoming International Affairs Club of Woodroffe High School to the Embassy.
For this visit, the Embassy invited Mr. Walter Conrad, a Canadian Korean War Veteran who served in the Korean War as part of the “A” Squadron of Lord Strathcona’s Horse regiment. In enhancing the student’s awareness of Korea-Canada relations in commemoration of the 60th Anniversary of the Korean War Armistice, Mr. Conrad shared his personal experiences in the Korean War as well as a detailed description of the atmosphere in Canada during the War, and also his personal perspectives on the current situation in Korea.
Counselor for Cultural and Public Affairs, Mr. Heon-jun Kim described the significance of the double milestones while emphasizing the close relationship between Korea and Canada from the 19th century to the present. Counselor Kim also explained the role of an Embassy, the role of a diplomat, as well as the various programs available for Canadians to take advantage of in further promoting the dynamic people-to-people exchanges between the two countries. 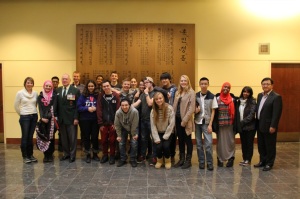