While shopping with my friend at a local Korean grocer, we came across a fridge full of soft drinks that suddenly reminded him of his childhood. In the midst of his nostalgia I asked him to pick out five of the most common drinks he had as a […]

5 Brands of Fruit Soju You Must Try This Summer

Remember how bitter-sweet Korean staple alcohol soju is? This year, a cheerful series of sweet, fruit-flavoured Soju stole the hearts and consciousness of young Koreans all across the nation. While it’s not available in Toronto yet, make sure to try them out when visiting Korea. 1. Sun Hari […] 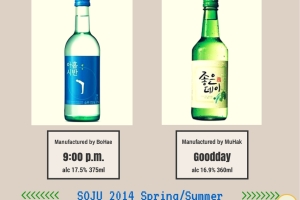 *apologies for the typo in the graphics; should be 9:30 not 9:00  #workingwithoutcaffeine Korean soju market (esp. Seoul, which makes up 40%+ of the entire soju consumption)  is pretty much monopolized by Choeum-chorum (translated as “Like First Time”) and Chamisul (translated vaguely as “Pure dew”) manufactured by Lotte and […]

With spring around the corner, some may feel that a celebratory drink is in order, for surviving a harsh winter, for welcoming spring or both. If the French claim wine as their national alcoholic beverage and the Russians, vodka; then the soju belongs the Korean. Soju is a […]