Outside of my English-speaking circle of friends, through a cluster of Indian and Pakistani merchants, over a bridge, and due north, can be found a patch of Korean shops and services known in Metro Vancouver as “Koreatown”. It stretches down both sides of North Road, hemmed in by Lougheed Highway, touching the three British Columbia municipalities of Burnaby, Coquitlam and New Westminster. 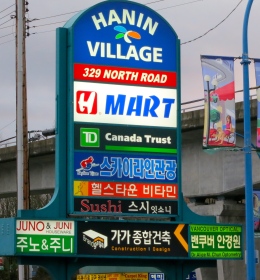 I have probably driven past this public shopping haven hundreds of times, its prominence inconspicuous in my usual hurry to arrive at some destination. Today my goal and destination is to visit this visible sign of the growing Korean community. It has become popular for thousands of Koreans who live within a twenty minute drive of here, those who make Korean the second most spoken language of Burnaby and Coquitlam.

Once inside this patch of distinctive Korean culture, I find it is clamouring with supermarkets, hair salons, bakeries, restaurants, telecommunications stores, doctors’ and acupuncturists’ offices, pharmacies and gift shops, and busy with cars and people coming in and out.

Each sign of unique and modular characters beckons visitors to look. Every sign nudges the non-Korean shopper to discover the connection between the Korean characters and the Korean treasures waiting inside.

The Korean food available stands out as remarkable and inviting as does the language. Spicy Kim-chi may be a familiar Korean food to many Canadians, but dried squid strips, Korean fluke fish, black bean ice cream and sweet potato cake have a way of getting my attention. After all, I had buttered toast for breakfast, and homemade apple pie for yesterday’s dessert.

Canada to me is more a patchwork quilt than the much-talked about mosaic – isn’t a mosaic made of broken fragments? Patchwork is the piecing together of various, small shapes of fabric in order to make one large piece, according to Helen Page, and quilting is the stitching which binds all of the layers and pieces together.

So, while this representative patch of Korean culture and society may appear separate, it is bound securely to the rest of Canada by the special efforts of the people who work inside and by those who leave again to take part in the society surrounding it – by their ‘stitching’ and the willingness of others to be ‘stitched’.

On my return home across the city, I reflect on the entire patchwork quilt of Canada – strong, solid, and sewn together slowly and deliberately, sometimes needing mending, restoration, even alteration, but always secure. My visit to Koreatown has made some of the seams invisible.