For many first-time visitors to Seoul, the Han River is a source of great surprise and admiration. Spanning at more than 1 kilometre across some parts of Seoul Metropolitan, it is much wider than say the Thames River of London – 265 meters – or the Seine River of Paris – 100 to 200 meters. Decorating its surprisingly large span, the riverside is home to a beautiful mix of water-front restaurants, cafes, walking trails, and natural beauty. The Han River is a must see tourist-site for anyone visiting Seoul for the first time.

But the Han River you see in Seoul is just a small part of the river. Going upstream, the Han River stretches all the way back to the foothills of Taebaek Mountain and Geumdae Mountain on the eastern coast of the Korean peninsula. The map on the right shows the expanse of the Han River with all its subsidiary streams. As you can se 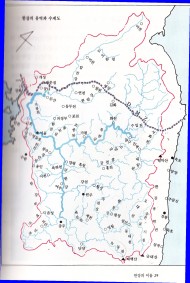 e, the Han River’s reach covers the northern part of the Kyonggi province, the province in which Seoul is located, and much of the Kangwon province in the eastern half of the Korean peninsula.

The name Han River (漢江)means a “wide or large river.” While this name refers to the entire river in general, there are different names depending on the region through which the river passes – and for good reasons as well. For example, one of the subsidiary streams that is connected to the southern portion of the Han River is called 주천강 (酒泉江), pronounced as JuCheon River, which means a spring that pours out liquor. In the old days, it was believed that from this spring flowed liquor instead of water. Perhaps, the taste of water from this spring was so good that it was mistaken for liquor.

The upstream portions of the Han River are home to many scenes of natural beauty. Overlooking the JuCheon River, for instance, are a large boulder and a lone pine tree. Named요선암 (邀仙岩), this place embodies a folk story about an angel who, after praying on this boulder. successfully won the love of a poet named 양봉래. Since then, many young men and women have visited this site to pray on the boulder with hopes that their own love may soon be realized. 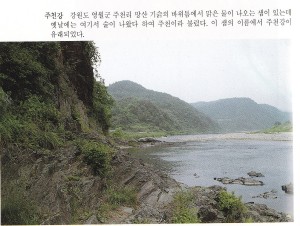 Another part of the Han river that is of particular interest is 단양 팔경. Located at the southern tip of the South Han River, it consists of eight magnificent cliffs and boulders that oversee the South Han River with elegance and dignity. A must-see tourist site, its natural beauty offers a different kind of experience of the Han River than what you would encounter in Metropolitan Seoul.

Overall, the Han River you see in Seoul is just a small part of its great natural beauty. Going upstream, the Han River offers a chance to experience its beauty in many different forms. But perhaps, a more important reason why we should appreciate the diversity and richness of the Han River is that it has been the lifeline of the Korean people for the past 5000 years.