Last weekend on December 6 was the annual Korea Day festival in Toronto — “Melodic Harmony: Classic to K-Pop.” It was held at the Isabel Bader Theatre and hosted by the University of Toronto in cooperation with the Korean Consulate and the Centre for the Study of Korea at the Munk School of International Affairs. Yours truly attended the event and had a blast! 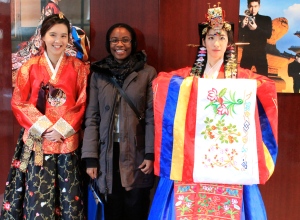 As I’m sure you can tell from the name of the event, this year’s theme was Korean music, with special attention being paid to the numerous contrasts between Korea’s rich musical traditions and the perhaps more familiar emergence and popularity of Korean pop music (K-Pop) in the present. Around five hundred ticketholders attended the event and were treated to an elegant performance on the gayageum. One of Korea’s most well-known traditional string instruments, the gayageum boasts a rich and deep resonance; it was played by the world-renowned multi-award-winning composer and performer Grace Jong Eun Lee.

Lee started solo but was eventually joined by the Korean Canadian Symphony Orchestra for an engaging fusion of traditional music styles. (Photo by Naomi Wada)

After the cheerful emcees introduced her to the audience, Lee treated us to a number of traditional and original solo works while wearing an elegant hanbok. She was later joined by members of the Korean Canadian Symphony Orchestra for some classical fusion, undergoing a wardrobe change to match. Personally, I’m a big fan of world music and always enjoy the merging of different classical music traditions. This happened to be a particularly good example. During the two-hour concert Lee played eleven arrangements, mostly her own original works. As the sound of the gayageum resonated through the theatre I felt particularly lucky to be witnessing this rare display in Toronto. Simply put, I enjoyed it very much — did I mention I’m a big gayageum fan?

Festival-goers were treated to a rather filling Korean lunch consisting of a variety of foods. (Photo by Naomi Wada)

Following Lee’s performance was a one-hour intermission featuring a lunch. This included a variety of hors d’oeuvres and such Korean culinary staples as ddokboki (spicy rice cake), bulgogi (marinated beef) and japchae, as well as a number of side dishes (bancheon), which of course included kimchi, to name but a few. The lineups were long and there was only so much food, but even though I was at the back of the line, I was still able to fill my stomach, which was much appreciated. The food was quite delicious and I was unable to stop myself from gobbling it up quickly.

One of the contestants of the k-pop themed singing/dancing contest. (Photo by Naomi Wada)

In contrast to the traditional sights and sounds of the first half, the second half of the event consisted of a singing and dancing contest with K-Pop as the central theme. The prizes — an LG flat-screen TV for the third-place winner, $500 for second place, and a combination of the two for first place — were great incentives, and the level of competition was high. I was expecting the usual enthusiastic displays of choreography from Ontario’s numerous dedicated K-Pop dancing clubs. Instead I was treated to a diverse showing of talented singers and dancers, many of whom were members of the dance groups I just mentioned. There were nineteen acts in all, and each was unique and endearing. However, the winners really did stand out and I think few were surprised at the outcome. It was a lot of fun and, as I’ve mentioned, the level of competition was very high, which was great to see. 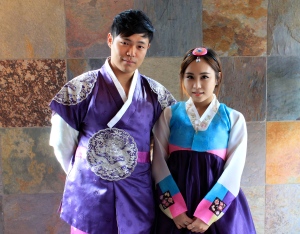 Two members of the University of Toronto’s Korean Students Association (UTKSA) pose in elegant hanbok at the entrance to the event. (Photo by Katharine Rowan)

The festival tickets were free for early birds and students and a mere seven dollars for general admission. In most cases one would have to pay a lot more to attend this sort of musical event in Toronto, so it was quite a steal. The festival has grown considerably in size from last year’s, which featured pansori (traditional Korean rhythmic storytelling). We can only expect even more grandiose displays in the years to come. Simply put, don’t worry if you missed it this year — there will be plenty of chances to come!