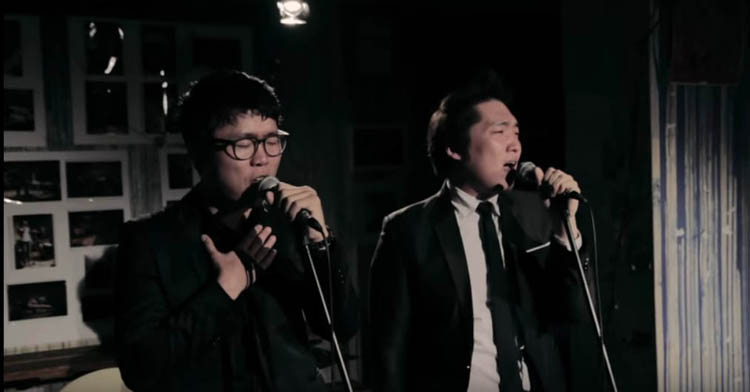 Cho Dong-ho (aka Mobetteradio), left, and Lee Dong-wook, are the two singers of the Korean R&B band Fellas.

Okay my friends, it’s goosebump time! Take two soulful guys (in suits!) sharing lead vocal duties, add wah-wah guitar, electric piano, and a cello for that classical touch (and additional melancholy) and the result is the stunning, addictive video below. I like it a lot; I hope you do, too! Give it a listen – can you resist the urge to sing along? I can’t.

The song is called Aftereffect (후유증) and the band is called Fellas (펠라스). Actually, the group often writes its name in this weird way – FEllAS. I don’t know why. (I’m going to write Fellas because it’s easier to read.)
After listening to Aftereffect a dozen times or so, I looked for more videos by the group and easily found more than 20. They were recorded indoors at clubs and TV studios, and outdoors at music festivals. Image and sound quality vary – some were obviously made by fans using their cellphones (and I’m sure Fellas must have many fans) while others were professionally done and even include info about the camera used, lenses and apertures, etc. The sound is not always perfect in the amateur videos, but the performances are always compelling.

I spent hours deciding which videos to share with you, but it didn’t feel like work– far from it! I could listen to these guys all day, and that’s pretty much what I’ve been doing lately. I like all their tunes so far, but there aren’t any that I like MORE than Aftereffect.

Even the sad songs from Fellas put a smile on my face, but for those who feel otherwise, here’s a bouncy, cheery tune called 1,2,3,4. If both guys were wearing suits and sunglasses there’d be Blues Brothers thing happening here.


I couldn’t find much in English about the group’s history, beyond the fact that they’ve been playing together since 2004, they often perform in the Hongdae neighbourhood in Seoul, and in 2012 they appeared on the Korean TV show Top Band 2, which probably increased their fan base enormously.

There are 19 songs by Fellas available for purchase on iTunes, and I did buy some. Sad to say, though, many of them sound rather calm and sedate to my ears, compared to the intensity caught in the live-performance videos. The energy and enthusiam coming from their fans takes the band up to another level altogether.

This next song below, 화풀어, doesn’t seem to have an English name. An Internet search told me the hangul translates to “don’t be mad,” and even showed me a cute emoticon.

On the other hand, the guys sing “Don’t Cry,” several times, so that could be a good “unofficial” title. They also sing “You’re the Only One,” which could work too. (Since first writing this, I watched the video again, and the site that took me there that time made an automatic translation of the song title, calling it “Calm Down.” Sounds a bit bossy and insensitive!) Whatever the name, the song sounds great to me.

There’s another cheerful song, below, which was shot outdoors on a sunny day, appropriately enough. It’s called More Good. At the beginning, the drums sound a bit Brazilian to me.


Speaking of Brazilian sounds, Fellas did participate in Rapercussion, a Samba Day at SangSang Madang Live Hall in Seoul. They sang Treasure and Runaway Baby, by Bruno Mars, backed by a troupe of drummers. Those drums sound a bit muffled on the video below, but the voices sound fine, and everybody seems to be having a fantastic time. Wish I could have seen that in person, or better still, been a part of it somehow, maybe playing some drums? The singing does not start until 2:50, so non-Korean speakers might want to fast forward to that spot.
I would really, really, really like to see Fellas live. One more reason to go back to Korea some day! If I were filthy rich, I’d pay them to do a Canadian tour so music fans here could enjoy them, too – assuming that they’d be willing to do such a thing, of course. I can imagine them playing at Montreal’s International Jazz Festival, or the Rialto, Sala Rossa, maybe even Metropolis? And where’s the Spectrum when we need it, huh?

If you’ve enjoyed these videos and you just happen to know a music promoter, why not tell him or her about Fellas?

Readers of this blog probably know that it’s supported by the Embassy of Korea to Canada. Too bad the embassy doesn’t put on musical tours! (Hint, hint. . .)
You can listen to more music from Fellas on this Cyworld page, which has continuous streaming. There are videos on the Facebook page for Fellas Band, and lots more on YouTube. As mentioned above, there are 19 songs by Fellas on iTunes.
‬
Fellas are on Twitter; if you like their music, you might want to let them know!
There is a Fellas page on Naver, too, but I know so little Korean that I couldn’t figure out what to DO once on that page. I clicked on various links, but not much happened. Some of you might have better luck!

Do musicians welcome song suggestions, or do they find them annoying? (I hope not, but who knows?)Assuming for the moment that the guys MIGHT actually see this post, here are some tunes I’d like to hear them do (in no particular order.) From my fellow Canadians: Still Believe in Love by Jacksoul, and Rocksteady by Remy Shand. I Just Want to Hang Around You by La India, Let’s Stay Together by Al Green; We’re In This Love Together, by Al Jarreau; She’s Gone, by Hall & Oates; What Becomes Of The Broken Hearted, originally performed by Jimmy Ruffin, and since interpreted by many; If You Don’t Know Me By Now, (Harold Melvin and the Blue Notes, Simply Red, etc.); Loan Me a Dime by Boz Scaggs; blues classic Stormy Monday. Maybe Testify, by Parliament? The original version, from way back in 1967. These are off the top of my head, I could probably think of lots more. But then I’d never get this post up!

Are songs you’d like to see re-interpreted by Fellas? Tell the world in the comment box below. Thanks!

Note: Music by Fellas has been described as R&B, Soul, and Neo Soul; I don’t think anyone would call them K-Pop. I just clicked on that category to make this post more visible to readers of this blog.