Visiting Korea: Know Before You Go

Travelling to another country is a thrilling experience, but it can also be overwhelming at first. Although I did a lot of research before I went to Korea, I still found that there were many things I had to learn along the way. I’d like to share some of these experiences with you to inform your own travels!

I certainly can’t cover everything in one blog post – and thankfully, there are lots of travel sites out there bursting with information about Korea – but here are three broad questions that I had when I was planning my trip, and the answers I discovered.

What should I bring with me?

If you’re anything like me, you have a tendency to want to bring everything when you travel, and it’s hard to justify leaving something behind, whether it be the essentials, that perfect outfit, or a Polaroid camera to capture each moment instantaneously. Depending on your personality and style of travelling, these might be the right items to bring! However, regardless of what makes the “must-have” list, I would advise you to pack as lightly as you can.

Despite the obvious weight limits when bringing luggage on airplanes, it’s also important to think about how you’re getting around once you’re there. I quickly learned that Korea is a country full of stairs, particularly at subway stations, so you’re going to need to be comfortable carrying your luggage up and down multiple flights. And of course, you want to leave room for souvenirs to bring home!

It’s easy to find basic toiletries in Korea, so you can bring small ones and buy more as you need them. You can also buy a USB-wall charger there for your small electronics that will be compatible with the local outlets, so a converter is only necessary if you have bigger appliances like a hair dryer to plug in. If you have a specialty item that’s less common, I do recommend bringing it along – for example, I realized once I was there that I should have brought my particular brand of sunscreen as it’s more suited to my skin type.

Finally, be sure to check both the historical weather patterns and the actual weather forecast before you pack! For me, a small umbrella was essential – I brought it with me every day for any sudden showers – and although it was supposed to be decently warm, the first week was colder than usual, so I regretted not bringing a sweater.

How do I get around?

Korea is a very travel-friendly country, so you will likely adapt quite rapidly to getting around. However, there are still some tips that I can give you.

In Seoul, the metro service is very well organized and has a lot of English signage. As other KCB bloggers have mentioned, the best way to make use of transit in Seoul is to get a T-Money card. You can buy them at most convenience stores, and reload them at T-Money machines in the subway stations. Then you simply tap the card on a reader when entering and exiting a subway station or when taking a bus, and it will keep track of how far you have gone and deduct the correct amount.

There are also a lot of great transit apps out there that include maps of the transit lines and will show you exactly how to get from one place to another (I found “Subway Korea” to be helpful). Each line has a color and a number to identify it, which makes it much easier to determine which one you need, and you can use your app to look up times and where to change lines.

When you arrive at a subway station, there will be various “exits” from that station that will be numbered (Exit 1, Exit 2, etc.). Each exit will bring you to street level in a slightly different location, and you will find maps inside the station to show you where those exits are and which one to take for various landmarks. If you are planning to visit unique areas like drama filming locations or a friend’s house, your directions will often include which exit to take.

Beyond the subway system, here are a few other transportation tips:

Buses: When you’re on a bus, they will announce two locations for each stop – the stop that you are approaching and the stop that will be coming after that. So if you’re listening for the stop you want, keep in mind that you’ll hear it twice, and the second time it is announced will be the right one.

KTX: This high-speed train system is a great option for moving between major cities in Korea. It is very easy to buy a ticket at a station that services KTX (eg. Seoul Station) as there will be a specific ticketing machine and you can use it in English.

Walking: Although the transit is great in Korea, you will still want to walk around to explore different neighborhoods and attractions. Be prepared to do a lot of walking, and wear shoes that won’t kill your feet!

Sightseeing: If you’re going to explore a large landmark like a palace or museum, be sure to grab a map! Gyeongbokgung in particular is spread over a huge area and it’s easy to get lost or miss a section that you really wanted to see. 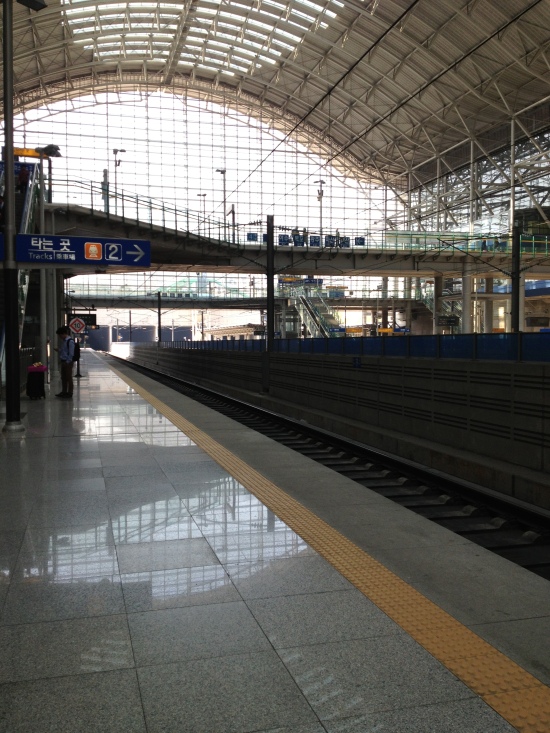 Waiting for the KTX at Seoul Station

What differences can I expect?

This could be a whole post on its own, but here I’ll simply focus on a few logistical differences.

I say this a lot, but I strongly recommend that you learn the Korean alphabet (Hangul) before you go to Korea. You don’t need to excel in Korean, but being able to sound out signs can be immensely helpful. For example, I wanted to take a bus from Busan to Haedong Yonggungsa and wasn’t sure where to get off. All of the stop names were listed in Hangul, and by reading them I saw that one was labeled for Yonggungsa – problem solved!

Aside from that, you will notice that many places (including landmarks and some restaurants) are closed on Mondays. You may want to factor this in when planning your schedule, especially if you only have a few days to see everything. If you need something on a Monday, though, don’t worry! Convenience stores are plentiful in Korea and live up to their name, so you can always pop in to one to find what you seek.

One difference that I would like to highlight is that when you enter someone’s home you must remove your shoes and put on slippers before you step inside, and this sometimes extends to restaurants and other public places as well. It is also helpful to know that generally there is no tipping in Korea, so you won’t need to add a tip when eating out.

Although I could add a lot more, the truth is that discovering the differences is one of the most enjoyable parts of travelling – so I will leave it at that. If you are travelling to Korea I wish you the best of trips, and I would challenge you to embrace the unknown wholeheartedly!

If you’ve been to Korea and have your own tips, feel free to share them below! Alternately, if you have any questions about travelling to Korea, please ask! I’d be happy to answer them as best I can.

Categories: KOREA-CANADA BLOG 2018, WHEN IN SEOUL: Living and Travelling in Korea