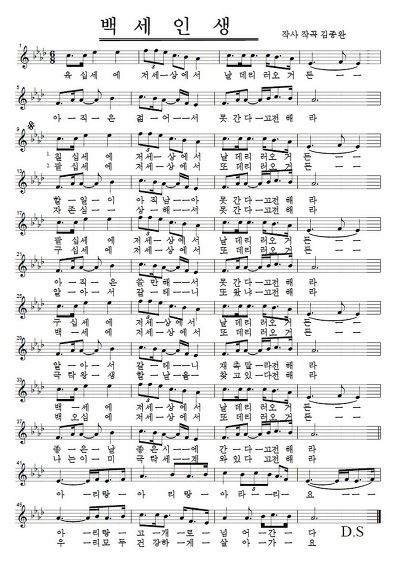 할 일이 아직 남아 못 간다고 전해라 (Please tell him I still have too many things to do to go right now).

좋은 날 좋은 시에 간다고 전해라 (Please tell him I will go when the day and the time are right).

극락왕생할 날을 찾고 있다 전해라 (Please hell him I am busy looking for a paradise).

나는 이미 극락세계 와 있다고 전해라 (Please tell him I am already at paradise, the heaven).

In Korea today, from children to adults, teenagers to seniors, they are all singing “A Centennial Life” (“백세인생”). Released in March 2015, “A Centennial Life” has exponentially gained popularity, a top choice at karaokes, hitting 4.9 million views on you-tube, and being parodied on the SNS in the most unimaginable ways: “If my boss tells me to submit the report, please tell him not to hurry, for I will submit it when I want”; “If my mother tells me to come home early, please tell her I still have too many things to do to go right now.” Its singer, Ms. Lee Ae-Ran (이애란), is personally experiencing the popularity too, having made appearances at the MBC TV ‘무한도전’, SBS TV ‘스타킹’, and KBS TV ‘아침마당’ in December. The song is a fusion of Korean traditional music and popular music. The chorus is an insertion of the widely known Korean folk song, Arirang, and the lyrics are comical, adaptive, and easy to remember, making a witty allusion to the longevity of life which modern science has made possible. However, hiding behind this comical representation is the sorrowful life story of Ms. Lee Ae-Ran. After a 25-year obscurity as singer, her meeting with “A Centennial Life” and its composer should be described more as fate than luck.

Ms. Lee Ae-Ran was born in a poor, rural family. Despite her harsh environment, she loved to sing and showed talent at an early age. She made her first debut as singer in 1990, recording the OST for KBS drama ‘서울 뚝배기’. However, her recording was never used in the drama. In 2006, she released her first album, but this too was never taken off from the shelves. Going into debt, Ms. Lee struggled to maintain her career as singer, going around the country to find any places to sing, at open markets, seniors centers, and village events. Her only refuge was her parents, economically and morally. She remarks today that the most difficult aspect of her past was the fact that she did not have a song she could call her own. Singing other peoples’ songs was the most difficult thing to do. By 2012, she had decided to give up her career as singer, but it was then when she met the composer of “A Centennial Life”, Mr. Kim, Jong-Wan (김종완).

Ms. Lee’s encounter with composer Kim Jong-Wan was made through her older cousin. When her older cousin found out that she had given up singing, he introduced her to his friend, composer Kim Jong-Wan, whom he had known for over 30 years. The two met, but the first song that Mr. Kim gave her was not “A Centennial Life”. Ms. Lee practiced the other song, but during practices, she would often hum the melody and the lyrics of “A Centennial Life”, which she had known sparingly since 1995 from her 1-month long lesson with a Korean traditional music teacher. Hearing this, Mr. Kim suddenly shuffled into his bag and took out a copy of “A Centennial Life.” It turned out that Mr. Kim had composed and wrote this music in 1995 when he had worked as a music teacher. He offered the music to Ms. Lee and asked her if she would like to sing it. When she took the music, she knew instantly that this was her piece of music. She accepted the offer, and thus began a difficult and rigorous training period with the composer.

Matching the voice to the song

Ms. Lee was a popular music singer, not a Korean traditional music singer. Her voice, therefore, had to be matched to “A Centennial Life”, which demanded the voice of a Korean traditional music singer. Changing her voice under the direction of Mr. Kim Jong-Wan, she gradually began to produce the sound appropriate for expressing the laments that were reflected in the lyrics. Unlike the comical impression it has given to its listeners today, “A Centennial Life” was originally written to reflect the fragility of life which composer Kim Jong-Wan had felt when he saw his friend’s father die at young age. In March 2015, Ms. Lee gave her first broadcasting of “A Centennial Life”. Since then, it has attracted the attention of all Koreans.

“A Centennial Life” as an ode

Unfortunately, Ms. Lee’s parents are not witnessing their daughter’s emergence from her 25-year obscurity. Her mother passed away in 2012, her father in 2015. Her father did see Ms. Lee give her first broadcasting of the song in March but did not live to see it grow into popularity. As Ms. Lee Ae-Ran has said, whenever she sings this song, it reminds her of her parents. Thus, for Ms. Lee, “A Centennial Life” carries a personal meaning – perhaps something equivalent to an ode to her late parents.