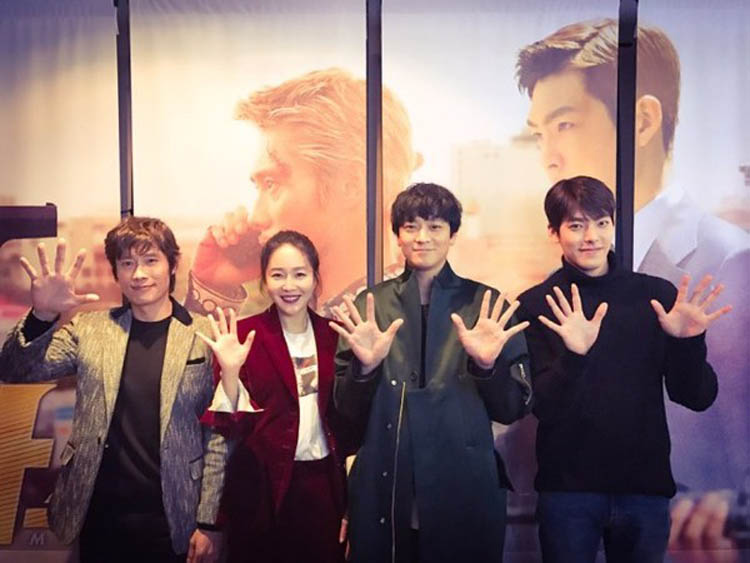 Master (마스터) is a new Korean film that’s tearing up the box office in its home country. More than 5 million people have seen it since its release on Dec. 21, 2016. It will be shown in many cities in the U.S. and Canada (including my own city, Montreal) starting on Friday, January 6, 2017.

The actors in Master include Lee Byung-hun (이병헌) Kim Woo-bin (김우빈) Oh Dal-soo (오달수) and my fave Kang Dong-won (강동원). The film was written and directed by Jo Eui-seok (조의석) who also directed the films The World of Silence and Cold Eyes.

Lee Byung-hun plays Chairman Jin, a crooked business man who has pulled of the biggest scam in South Korea’s history. Kang Dong-won plays Kim Jae-myeong, an investigator who wants to catch Chairman Jin. After threats and/or persuasion (I have not seen it yet!) Jin’s employee, Park Jang-goon (played by Kim Woo-bin) agrees to help Kim with the investigation. Behind the scenes (I’m guessing) he tries to outsmart Jin and Kim.

The trailer shows Lee’s character speaking to enthusiastic crowds (just as he did in the award-winning film Inside Men). There’s also some purposeful tapping at computer keyboards, smirks, car chases and gunplay. It’s not the greatest trailer I’ve ever seen, but I’m looking forward to the film all the same.

A lot of Master was shot in the Philippines under gruelling conditions. Korea gets very hot in the summer, but it seems that the weather in the Philippines can be hotter and more humid still. In a video interview Lee Byung-hun said that some filming was done in Tondo, which he called one the three most dangerous  places in the world.

Fans of Korean films might have seen Lee Byung-hun in A Bittersweet Life, The Good the Bad and the Weird, I Saw The Devil, Masquerade and Inside Men, just to name a few. He has also appeared in Hollywood films The Magnificent Seven, Terminator Genisys, Red 2, G.I. Joe: Retaliation and G.I. Joe: The Rise of Cobra.

Kim Woo-bin was in the Korean films Friend 2, The Con Artists and Twenty. He appeared in several TV dramas, including Vampire Idol, A Gentlemans Dignity, The Heirs, and Uncontrollably Fond.

Kang Dong-won has been in 17 feature films, with Duelist, Woochi, Secret Reunion, Kundo: Age of the Rampant, The Priests and A Violent Prosecutor being just a few of them. Many of Kang Dong-won’s films and Lee Byung-hun’s films were shown here in Montreal at the Fantasia International Film Festival.

Master is being shown at Cineplex Forum in Montreal.