I traveled quite a few times in the Korean countryside and I would like to share my experience and make recommendations. One of the first things to know when you travel in Korea is that Korea’s natural wonders are heavily protected. A long time ago, South Korea passed […]

Commuting to work with buckets of live octopus and classes of four students? This second edition of Teacher Talk explores the uniqueness of teaching in rural Korea. 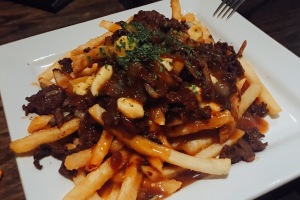 Korean-Canadian fusion food! How, you wonder?

By combining delicious Korean bulgogi and beloved Canadian poutine together, that’s how!

Bibimbingsu is a play on the word bibimbap (비빔밥), which is a traditional Korean rice dish which originated from the royal table. Literally translated, it means “mixed rice.” In this case, I guess we can all this “mixed bingsu!”

How Can Tourist Attraction for Dummies Be Replaced by Vancouverites Attraction?

The family that owns the Dreamy Camera Café sits happily in front of their home and café. A South Korean family from Yangpyung (located 40 miles from Seoul) have built a life-size vintage Rolleiflex twin lens camera café. The family consists of the husband who is an army aviation […]

5 Things that are Confusing to Koreans Visiting Canada

According to the Canadian Tourism Commission, Canada welcomed approximately 137,300 overnight travelers from South Korea in 2012. These visitors injected $234 million in Canada’s tourism economy. Besides the sub-zero temperatures during winter and the occasional deer or moose on the highway at night, Koreans visiting the second largest […]

Ambassador Cho on Korea and Canada

Recently, Korean Ambassador to Canada Cho Hee-yong addressed an audience at the University of Alberta in Edmonton, which is located in the province of Alberta, in Canada.  Ambassador Cho has resided in Canada for one year this July, which puts him in a special position to reflect on […]